When you try to explain what znoud el sit are to people who don't know - cream filled filo pastry rolls which are then deep fried - they usually gasp in shock 😱 or have love eyes 😍and then you add the bit about dousing them in sugar syrup and it's usually too much.

Znoud el sit (which translate to ladies fingers) are very popular during Ramadan for exactly that reason, they are a quick pick me up and you can rarely just have one.

There's something about warm thickened cream encased in pastry that knocks away your self control.

I use filo pastry (or phyllo if you're in the States) and cut the sheets into thirds which you can overlap in a cross shape to give double support.

You don't want the cream to burst open or the znoud will become very oily and it won't look too pretty.

When you fry them you want the oil to be hot enough but not too much or they will burn quickly.

They only take a minute or so on each side and they're done. Add a little syrup while they are still warm but don't soak them or they will become sickly sweet.

You can always top them up later if you have a sweet tooth.

The cream is made in a similar way as you would prepare for atayef b ashta (cream filled pancakes).

I find the the best ratio of milk to cream is 50:50 though you can use less cream if you're trying to make them healthier.

But seriously why bother because this dessert is not pretending. As always sprinkle with some crushed pistachios and indulge in the decadence without regret. 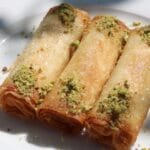 For the Clotted Cream (ashta)

For the Orange Blossom Syrup

To make the Clotted Cream (ashta)

To make the Orange Blossom Syrup

To assemble the Znoud el Sit

You may also like these recipes from the Zaatar and Zaytoun collection: