Falafel falafel! You have been requesting a great falafel recipe from us and we don't like to disappoint.

Though we will admit we buy our falafel most of the time from special Middle Eastern shops here in London (6 for £1.20 that's a bargain!) it is still nice to make them once in a while and with a food processor it literally takes ten minutes to bring it all together.

In Lebanon the best falafel I have ever tasted were from this shop in Saida known 'Abou Rami'. They are so perfect they make you emotional.

Each element of the falafel sandwich is just right. The tomatoes, the pickles and the tahini sauce. I also love the little bit of extra hot sauce but not too much.

If you ever pass by in Saida make sure you stop by and grab a falafel wrap... and get one for me too.

I don't know why people develop a mental block to a recipe when you tell them to soak some beans the night before it really is as easy as putting some beans in water and adding a spoon of bicarbonate of soda.

For real people get your priorities straight.

Now for the big falafel debate. Should you use chickpeas or fava beans or both. The Palestinians like to use chick peas and the Egyptians prefer to to just use fava beans (foul).

The Lebanese traditionally use both. Then we must consider how much chickpeas to fava beans ratio? Some people use more of one and we tested them several times using different blends and found that half half ratio was the best.

Falafel relies on fresh herbs for that nice green colour. We found using double the amount of parsley to cilantro (coriander) was best.

You can buy 'falafel' spices ready blended in Middle Eastern shops but we have given you the basic mix, which includes cumin, black and red pepper, chilli powder, coriander and seven spice.

I actually prefer to add my own spices as sometimes the ready made spice mixes are too strong and you can't control the amount of each spice. You can find the full recipe for seven spice here.

The bicarbonate of soda (or baking soda as you might call it in the US) is responsible for the round puffy shape of the falafel.

It is important to balance how much bicarbonate of soda you add in the actual falafel. If you don't use enough they will not puff up. If you use too much you will taste it and it will hurt your tummy later.

That's the test of a great falafel.

If you have a falafel scooper your life will be much easier but we couldn't find ours so we just rolled them into balls and dipped them in sesame seeds just before deep frying.

Enjoy with some tahini sauce mixed with lemon and salt and a few pickles (the pink ones if you have them) and fresh vegetables (sliced tomatoes, mint parsley) and wrap in soft fresh flatbreads.

You can also add fried cauliflower and aubergine slices to make them more substantial.

Falafel- the Middle East's greatest gift to the world. You're very welcome. 😜

Can I bake falafel?

Not really. They won't have the same crunchy texture and though I have seen some recipes for baked falafel they look a bit stodgy to me. You will have to deep fry them as you don't want them sticking to the pan or they will crumble, which might be the case if you shallow fry them. 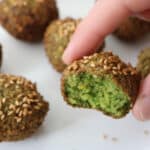 You can freeze any extra falafel mixture for frying later

If you enjoyed making this recipe, leave us a star rating below.