This comforting dish features mince meat rice topped with chicken and nuts. The rice is cooked in the chicken broth which is made beforehand.

It's not as loud and glamorous as it's cousin the maqluba, which relies on frying the different elements, yet it's just as delicious, especially when served with a nice salad.

It is also commonly known as 'tetbe2a' which I think from the fact that it is assembled together.

The main components of the dish are:

Even though this dish contains a little mince meat, the star of the show is the chicken, which goes over the rice like a wreath.

You only need to simmer the chicken for around 45 minutes (whereas my usual chicken broth I leave for 1.5 hours).

When shredding the chicken, try to keep them in large chunks as much as possible as they look better that way when they are placed on top of the rice.

I've used a mixture of lamb and beef which I feel gives the best flavour. You can use either one no problem.

I toasted cashews, pistachios and sliced almonds, though of course you can also use pine nuts, or almond halves.

If you just have whole almonds, then soak them in some water for around 20 minutes then peel.

You almost need to work backwards with dishes like this....

Toast the nuts first and set aside (to garnish at the end).

Brown the meat, add the rice and simmer for around 20 minutes

Layer up the dish, rice first, then chicken and nuts on top.

Giving the visitor ideas on how they can change this recipe to better suit their dinner guests, or their cultural cuisine, is a great way to increase the chances they make the recipe

You will need a large stock pot to make the chicken broth, and quite a large casserole dish to absorb three cups of rice.

You will also need a wooden spoon and fine sieve for the rice and fine colander for the broth.

Store in the fridge for up to three days. To reheat, add a little water and simmer on low heat for around ten minutes.

Freeze any extra chicken broth for soups or stews.

If you are making this for a dinner party, you can do much of it the day before.

For example, you can toast the nuts beforehand and keep them in an airtight container.

You can also make the chicken broth and set aside the 4-5 cups of liquid you will need for 3 cups of rice.

Same for the shredded chicken, you can do this the day before and keep it in a box or covered plate. Simply reheat by placing it on top of the rice when it simmers.

That's the secret to Middle Eastern feasts, prepare as much as possible the day before then assemble like 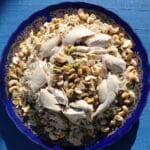 For the chicken broth

We have a lively Facebook group where we post frequent recipes and discuss Lebanese cooking in general, as well as a tiktok page.

You may also like these recipes from the collection: