Time for another Middle Eastern dessert to add to your summer picnic spreads.

This time we have Namoura, an eggless semolina coconut cake drizzled with a sugar syrup, also known as Basbousa in the wider Middle East.

If you are not familiar with it, you really should get to know one another.

I have tested many many many namoura recipes and adjusted this final version to my liking. I found that I don't like the texture too dense, which makes it difficult for the syrup to trickle down.

Even though some recipes don't have coconut, I quite like it as it adds another dimension to the final flavour.

My ideal namoura is light and fluffy and makes you want to eat another one even before you've even finished the first piece.

Semolina is a key ingredient in many Lebanese desserts such as Maamoul Mad bi Ashta and Sfouf.

You can find it in most supermarkets and usually comes in big sized bags. It comes in either 'fine' or 'coarse' texture.

In this recipe i've opted for coarse semolina as I want a fluffier cake rather than a dense one. Though you can use fine semolina if you have it as it also works.

Once you combine all the ingredients which literally takes five minutes, let the namoura sit in the bowl to 'rest' for around half an hour.

You might need to loosen the texture with a little extra milk. You can also swap the oil for melter butter.

Make sure you cut the diamond shapes in the namoura cake mxture BEFORE you put it into the oven and not after. You might need to recut it when it cools down.

Use either peeled almonds split into half or pine nuts to decorate each diamond shape.

This recipe makes a lot of cake so you will need a larger cake tin or split it into two cake tins.

Namoura is usually drizzled with a simple orange blossom syrup. Though to tell you the truth I have eaten it without the syrup and it is still yummy.

The orange blossom syrup uses 2 parts sugar to one part water (ratio of 2:1 sugar to water).

Simply heat up the sugar until it comes to the boil then let it simmer for five minutes before adding a little orange blossom.

Pour the syrup on the cake while it is still warm so the namoura soaks up the syrup but don't add too much just so you glaze each section, you can always top up later.

There's nothing like the smell of warm orange blossom syrup wafting through the house it really will take you back to your childhood. 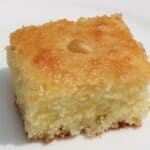 For the orange blossom syrup

To make the orange blossom syrup

To make the Namoura cake

Baking soda is also known as Bicarbonate of Soda

You may also like these recipes from the Zaatar and Zaytoun collection: