Cheese and Zaatar toasties are a great way to start using zaatar if you're not too familiar with it.

Zaatar is a strong herb and it roughly translates to wild oregano which is common in many mediterranean countries.

Even though many times it's presented as thyme, it's slightly different than the regular thyme you get in your supermarket.

The other way to eat zaatar is to mix it with some good olive oil to form a runny paste and dip bread in it.

I've written in depth about zaatar in this section of the blog explaining the different types and how it's usually consumed.

Growing up our parents used to encourage us to eat zaatar, usually for breakfast or as a light dinner, by telling us it was good for our brains.

Of course we thought they were tricking us but now apparently it's true 🤓zaatar can aid your memory and even has cancer fighting properties.

Many supermarkets offer zaatar in the herb and spice section but if you have a Lebanese friend try and get some from them as the quality will be better.

You can use any bread but i've used a stone baked sourdough here.

Any mild flavoured yellow cheese will do such as Gouda, emmental, Mozzerella that's suitable for toasting or even a mild cheddar.

Something like Feta or Brie would be too strong for the zaatar and you couldn't distinguish the final zaatar taste from the cheese.

I love using a mix of cheeses as they each give a different dimension to the cheese toasty.

The key is not to put too much zaatar on as it will overpower the cheese. You need to treat it like a seasoning so not too much but just enough to taste it of course.

Make sure your griddle is very hot before you put the toastie on so it doesn't dry up as it's heating.

This is one of the most typical ways Lebanese people eat zaatar, of course the other way is on a manoushe (oven baked flatbread).

Sometimes when i'm in Lebanon I ask the local baker to mix cheese with zaatar on my manoushe as I love the creaminess of the cheese against the sharp tangy zaatar.

Cheese and zaatar will become your favourite new speedy snack when you want more than just a boring cheese sandwich. 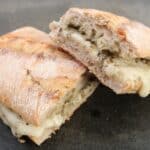 If you make any of our recipes let us know how it went via our Social Media platforms.