Malfouf is much easier to prepare than stuffed grape leaves or zucchini (kousa mahshi) as the leaves are larger and quicker to roll up.

Even the stuffing is quite easy to make consisting of meat rice and a few spices.

If you want to make this version just use the vegan grape leaves stuffing on this link instead of the meat one.

You can make malfouf with any cabbage leaf that lets you roll it up but I have used the very large cabbages found in Middle Eastern grocery stores.

One of these cabbages weighs more than a kilo and they give you a lot of big wide leaves perfect for stuffing.

Alternatively you can use chinese leaf cabbage or sweetheart cabbage as they are supple and have a thin texture.

Something like savoy cabbage would be too difficult to roll up.

The most difficult bit is probably separating the leaves making sure you don't rip them as you do so.

Then you have to blanche them in hot water for about five minutes until they go soft and lighter in colour.

I also trim the stalks off and divide the very large ones in half so they are no bigger than the size of my whole hand.

I then stack them on top of each other so they are ready to be stuffed and rolled and stacked again in the pot.

The meat and rice stuffing

Most people like to use ground beef as it is less fatty than lamb when it cooks.

However I am a lamb fan and so I use both lamb and beef to get a nice flavour.

You will notice that most mahashi (stuffed vegetables) use short grain rice as it soaks up the flavour better than long grain varieties.

I also add some tomato concentrate to the stuffing as well as seven spice, black pepper and a bit of cinnamon.

Malfouf is a subtly flavoured dish and you shouldn't overdo it with the spices or add something crazy like chilli.

You can also layer the bottom of the pot with lamb chops if you want to be extra fancy and want to create a wow moment for your guests as you flip over the pot onto a large platter.

However I would flash fry the lamb chops off in a separate pan to reduce the greasy taste.

How to roll the cabbage leaves

No fancy side techniques required. No fiddly bits like grape leaves.

I've even made a video to show you how easy it is.

Well actually my mum was rolling them and I was filming because I can't do everything at once. Ha!

Tips for making the best malfouf

Now here are the secret tips to making amazing life changing malfouf as opposed to average bla malfouf no one remembers.

Get a whole bulb of garlic (yes a whole head of garlic), peel them and slice them roughly longways. Then scatter them between the layers of cabbage rolls.

Make a brine of salty water approximately two teaspoons to two cups of water and a lemon, and pour it on top of the malfouf to cover.

You need to taste this brine as this will tell you how salty or lemony the overall dish will be, so adjust it as necessary.

Before you switch off the heat, take one cabbage roll and taste it to see if everything is done. 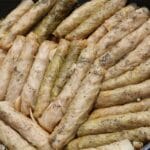 If you enjoyed making this recipe, leave us a star rating below and let us know how it went.