This is my Mama's seven spice mix. I use a pinch of seven spice in 99% of my recipes so this is a good one to have if you love Lebanese cuisine.

Sometimes even a little tiny hint of seven spice will make a big difference for example in tabbouleh.

Other times you want to add a big spoon such as in my seven spice and sumac chicken.

Garam masala is also added to supplement these 7 spices and provide a backdrop.

You can also add ground cloves, nutmeg, fenugreek and ginger, but I feel these are too strong for a basic spice blend and don't include them.

There are no hard and fast rules about spice blends; you can increase the ratio of spices you like and decrease or even remove ones you're not so keen on, and every family has their own version.

A good way to know if spices are still good to use is to smell them (who would have thought!) and if you don't get a strong aroma then it is probably past it's best.

You can now buy quite good seven spice mix in the UK; usually called 'Baharat' which basically translates to 'spices' in Arabic.

However, I promise it will always taste better when you make it yourself. It's always fresher and you know the proportions of the spices that go into it.

You can even make little jars of seven spice to gift to friends who will surely appreciate an authentic recipe. 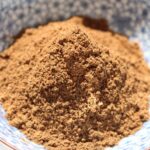 You can also had half a tablespoon of the following: cloves, nutmeg, fenugreek and ginger.