Tabbouleh is a parsley salad. Let me clarify again; it is not a bulghur wheat salad with a sprinkle of parsley as I have seen in many supermarkets.

In every family Lebanese family there is someone who is really really good at making tabbouleh.

You must make sure you use fine bulghur wheat not the coarse one. The coarse bulgur wheat will soak too much liquid and ruin the final texture

I've even seen some people in Lebanon forego the bulghur wheat in their tabbouleh salad, though I think it adds a nice texture.

Soak the bulghur wheat about five minutes before serving the tabbouleh as you don't want it too soggy.

A brilliant tabbouleh can only be achieved by chop chop chopping the parsley again and again until it is fine enough.

Although some people use a food processor to chop the parsley I don't recommend it as it becomes slushy and uneven.

Tips on making the best tabbouleh

You also want to use nice red salad tomatoes that are still a bit firm as they will be too difficult to chop if they are mushy.

Using the best basic ingredients is key so when choosing your bunch of parsley, the leaves should be vibrant and not too coarse, the lemons should be fat and juicy and the extra virgin olive oil the best you can afford.

Don't be stingy with the olive oil as the parsley soaks it up and you don't want it dry.

How to eat tabbouleh

I love eating tabbouleh with grilled meats and a side of chips (hand-cut obviously) and it is also substantial enough to be eaten by itself as a light dinner (a side plate of hummus wouldn't hurt either).

But everyone knows the best and messiest way to eat tabbouleh is to scoop it up in gem lettuce leaves and scoff it down in the most inelegant way possible.

Sometimes it just has to be done 😊 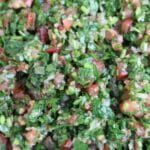