One of my greatest food memories involves tomatoes; we were touring South Lebanon and we stopped off at my cousin's in-laws in this little hidden village beside a waterfall, and they were making a huge pot of tomato sauce on an open wood fire.

It was HUGE as in it could fit a small person inside and I will never forget that tangy mouth watering smell of slow cooking tomatoes.

They were preserving the extra summer tomatoes for the coming winter months and although I don't live in a remote picturesque village, I still think it's comforting to know how to make and store a basic tomato sauce.

Some people advocate straining a tomato sauce at the end but I prefer to blitz with a hand blender.

I have used the fine metal strainer method before but it causes a lot of unnecessary mess and actually I think blitzing it gives the sauce a nice texture which you lose with straining along with the extra goodness from the skins.

In this recipe I used a mix of beef, plum and over ripe salad tomatoes. Each tomato adds something different be it in tanginess, sweetness or texture, so use whatever one's you have at hand, though of course the more variety you use the more interesting your final flavour will be.

If i'm not using the whole sauce in one go and probably won't for the next few days, then I usually freeze it.

You can keep the whole thing super simple using only tomatoes, regular olive oil  and salt but here I add a few sprigs of oregano and basil which go with most dishes anyway.

I wouldn't add thyme, coriander or parsley because they are too strong and you can always add the herbs or pepper later depending on your final dish.

It's difficult to give an exact recipe that relies on using leftover over ripe fruit; essentially it's more about the process than the quantities.

For a subtle garlicky flavour, add a clove or two of garlic peeled and sliced in half, but remember to remove these before blitzing if you don't want it too strong. 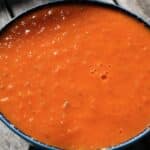 Let it cool before you store in the fridge or freezer.