Muhammara is a beautiful walnut and red pepper dip that goes great with grilled meats, nachos and as part of a mezze platter.

It is a popular dish in the Levantine area, especially Syria, but we also make it in Lebanon and this is my aunty's recipe.

Even though muhammara is commonly found on restaurant menus it is rarely as good as when you make it yourself. I wasn't a fan of it until I tried it at home and now I am obsessed.

The most important ingredient is the walnuts which you can buy easily these days shelled and ready to use.

Some versions contain breadcrumbs, others don't include red pepper, and the amount of spice varies too, but for me the most important thing is the muhammara isn't dull or bland.

For this reason I use both lemon and pomegranate molasses which work together to make it zing. Muhammara should be spicy and sour and earthy all at the same time.

I use one red bell pepper and one Romero to give a more interesting final flavour.

I scorch the red pepper straight onto the gas hob, in a similar way to eggplant when making baba ganoush.

Even better if you cook over charcoals. This gives it a brilliant smokey flavour that you can't really replicate in the oven.

Simply rotate the peppers with a fork or tongs until most of the surface has blistered. It's a little messy but so worth it I promise.

If you are mess averse, then you can put the peppers on the griddle or under the grill (broiler) to char the outside.

Just let the charred peppers rest for a few minutes then scrape off the burnt bits with a fork.

Then cut off the heads, remove the seeds and divide them into sections.

Alternatively if you are rushed for time you could use readily roasted red peppers.

Some chilli powder or cayenne will give the muhammara a nice kick. You can also add cumin to enhance the earthiness and sumac to complement the sourness.

Muhammara is supposed to be a strong tasting dip so feel free to adjust spice levels according to your preference.

You can even add a few chilli flakes or fresh chilli. Turn up that heat as much as you dare.

Tips for making the best muhammara

Using a food processor makes everything quicker and smoother. Get all your ingredients together and simply blitz.

Muhammara has garlic in it so consume wihtin three days and store in an airtight container.

Plate it up in a shallow bowl and drizzle some good extra virgin olive oil on top for finish. You can scoop it up with flatbreads, nachos or crackers as you wish.

Try adding it to your cheese board, game night snacks or bbq and you won't look back. 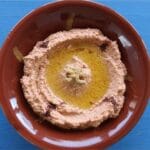