Cheese fatayer are traditionally filled with mild cheeses such as feta with a hint of parsley. They are not usually made with lots of ingredients to keep them simple.

What cheese is best for fatayer?

Feta cheese or something similar is popular when making cheese fatayer as it is mild and crumbly, and also doesn't seep out alot of liquid.

You could also substitute with ricotta, halloumi, queso or mozzarella. Cheese fatayer are a great way to used any left over cheeses in your fridge.

The most important thing about the cheese is that it can handle heat well in the oven.

You can make either open or closed fatayer. You can shape them any way you want though for some reason cheese open fatayer are usually almond shaped ad closed ones are semi circle shaped.

They are basically the same except that the cheese dries out a little more in the open version and you can see the filling, which might be handy if you have lots of different fillings going on.

There's nothing to prevent you making triangle shaped cheese fatayer except they are a little more fiddly and for some reason they are associated with spinach fatayer.

I think people shaped pastries in trademark shapes to help recognise them quickly.

Cilantro (coriander) is much too strong and will overpower the cheese. This would suit meat or chicken pastry fillings better.

You could also add some chives and a little bit of mint to the cheese but in smaller quantities than the parsley as they would be complementary herbs rather than the main one.

As the cheese is already salty I don't add anymore salt to the mix. But I do find adding a teeny tiny sprinkle of black pepper brings out the cheese that little bit.

It's these little tiny additions that can make the difference between an ok cheese fatayer and a special one.

Can you fry cheese fatayer?

If you close them you can fry them to make cheese sambousek. Fatayer are usually baked and sambousek are fried.

Sambousek need to be fried in very hot oil to avoid them becoming greasy. You can test the oil by dropping a little piece of dough and if it floats and sizzles to the surface then it's ready.

If you are making open fatayer then add a little drizzle of either vegetable oil or regular olive oil to stop them becoming too dry.

If you are making closed fatayer, don't press them down with the fork too hard or they will stick to the board. Add just enough pressure to close them but not too much.

Just before you put them in the oven, brush them with a little milk to give them a nice golden colour. I always forget to do this and then pinch myself.

Cheese fatayer are a perfect side dish or snack. You can have them for breakfast or pack them in your picnics.

They are popular with kids and adults alike so you won't have to worry about storing them too much, but if you make extra, keep them in an airtight container for up to 3 days in the fridge. 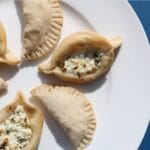 To make the cheese fatayer