You can't get much fancier than sheikh el mahshi for a dinner party and yet it is deceptively easy to make.

This was one of those dishes I had avoided for a long time as it seemed too complicated but I managed to crack it first time and have been making it without blinking twice since.

Even though the cooking process has three stages (make the mince and tomato sauce - fry the eggplants- stuff and bake them) they are all simple things in themselves and don't require a chef's certificate. Perhaps the most difficult bit for a newbie is frying the eggplant.

When I first asked my mum how to make it and she said fry them I was like 'Are you sure mum, aren't you supposed to roast them?' since she always takes the healthier route where possible.

But she was adamant that frying them was the traditional way and actually once you drain the eggplants, you don't really add much oil anywhere else.

Try and find small-ish eggplants where possible not those large ones the size of a small baby. Nor do you want to use very small ones that will make stuffing difficult and can be bitter.

When frying you want to get them half done so the colour turns but not scorched as if you were making baba ganoush. You want to make sure they are in tact so you can stuff them easily.

Tips for stuffing the 'sheikhs'

Just before stuffing with the tomato meat sauce, get a fork and scrape around the inside the eggplant so it will blend easier with the stuffing.

Some people take out the insides to mix well with the stuffing before returning to the shells but I don't think thats super necessary as they will cook together in the oven anyway.

You can even make the mince meat and tomato sauce the day before so you are ahead of the game, especially if you have a dinner party and want to save time.

Get ready for a wow moment when you whip out your sheikh el mahshi from the oven and casually sprinkle some pine nuts on top. 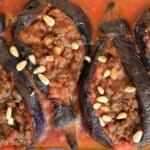 Eggplants stuffed with mince meat baked in a tomato sauce

To make the mince meat

To make the tomato sauce

To prepare the Sheikh el Mahshi