Lebanese people love stuffing any vegetable with something delicious and swiss chard is another great one to try.

It's relatively quicker to make than stuffed grape leaves as the swiss chard leaves cook faster and are bigger, which means you pack them with more stuffing and be done faster.

Good quality swiss chard is also easier to find in the markets from June to April, meaning you can get fresh leaves for most of the year.

Choosing the best quality ingredients is half the job to making anything delicious.

So make sure you choose chard leaves that are not wilted or sad. You can also use rainbow chard which is pretty.

You can tell if the leaves are good by rubbing them between your fingers so they are supple and not too coarse. Trust your instinct.

If you are making a large pot you will probably need to double the amount of chard given in the recipe card.

The trickiest bit of this recipe is knowing how to separate and roll up the leaves.

Blanche them in a pot of boiling water for around five minutes then layer them on top of each other to cool.

When you are ready to stuff them, remove the thickest bit of the stem with a sharp knife (you can fry these off later with some olive oil, pepper and lemon).

You need to be quite firm as you roll them up (see video) and arrange them tightly in the bottom of the pot.

If the leaves are very big, you can slice them in half long ways and make two out of one.

Once you roll up all the chard leaves, add some salt to a cup of water to make the brine and cover with a lid one size smaller than your pot.

You can also use a heavy plate as this will help keep the chard rolls in place. You can remove this lid/plate once you bring the pot to the boil and turn the heat to a simmer.

As with most stuffed vegetables you can make a meat and rice version or a even a mixed one with both vegetables and meat.

For the meat and rice version you can use the stuffing recipe from kousa mahshi (stuffed zucchini).

If you have any left over stuffing you can also blanche lettuce leaves (romaine lettuce is my fav) and add them to the pot, making a delicious addition.

Adding a little chilli powder (1/4 tsp) will give it some kick though not too much as it will ruin the spirit of the dish.

Soak the rice beforehand for around half an hour so the dish cooks quicker.

Always use short grain rice for stuffing any sort of vegetable, it soaks up the juices well and doesn't make the dish dry.

You can also add sliced potatoes to the bottom of the pan, just make sure it's a variety that won't fall apart when boiled.

When the dish comes to the boil always taste the brine water too as this well tell you how salty/lemony the overall dish will be and make necessary adjustments.

You should always test one chard roll before turning the heat off to check the rice is done well. 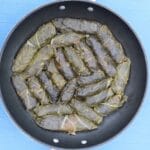 To make the stuffing

To assemble the chard leaves

To make the brine