Red Split Lentils are one of the quickest pulses to cook, you don't have to soak them overnight or fuss around with them.

This Lebanese red split lentil soup recipe is done in half an hour - perfect for when you're feeling a bit run down.

I wasn't much of soup maker until recently, for no good reason other than I relied on my mum to make all sorts of different soups every time we popped round her house (Brown lentil and chard, chicken, harira, every bean to name a few).

Soups seemed to be one of those funny food categories that required too much effort for something that wasn't the star of the show.

Then when my son got ill I finally called her up to ask for the recipe and now he calls this one 'Teta's Secret Golden Soup'.

The classic lentil to water ratio is 1 to 5. It really is a good idea to measure out the cups and save yourself the trouble of topping up water.

You will find this ratio in other recipes such as mujadara with rice and caramelised onions as well as mujadara makhbousa.

Brown or green lentils will create loose lentil skins. If you only have brown lentils try my brown lentil soup with swiss chard also known as 'adas b hamed'.

Potato, onion and a carrot are all you need for this simple soup.

Use a medium one of each and dice them roughly as you will be blitzing the soup with the hand blender later.

You only need a bit of turmeric and salt to spice up this soup.

Don't make the same mistake I made once by adding too much turmeric (I was unwell thus my judgement was impaired) it will overpower the whole thing.

Add a small pinch or tip of a small spoon. If you want to be technical make that 1/8 of a teaspoon.

It's just good practice to remove the white froth that comes away when you boil the lentils.

If you don't remove them then they will go into the flavour and it might taste a bit gritty.

My husband likes to add lemon at the end but I think it doesn't need it.

You can also add a small drizzle of extra virgin olive oil but again not too much or it will overpower the subtle flavours.

This soup is earthy and humble and warming, and with a nice crusty bread it makes a meal in itself. 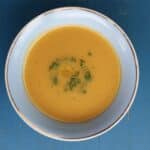