Lahm bi ajeen literally translates to 'meat in dough' and should really be a food group in itself.

Bread and meat really is the basic stuff of life that has enough magic in it to get you through the most difficult of days.

In Lebanon, people traditionally either make the meat mixture at home or get it ready made at the communal oven (the Furun)

For some reason, lahm bi ajeen has such a distinct smell you can recognise it from a mile off and it usually triggers childhood memories of comfort food for many Lebanese.

The meat (usually ground beef) is combined with tomatoes, onions and spices to give quite a loose texture.

You might think that this means the dough will be soggy but the open pie means all the extra moisture is evaporated in the hot oven.

I use a food processor to really blitz it together well and plus you can prepare it in two minutes.

Lahm bi ajeen has more tomatoes than your standard sfeeha meat mixture which is traditionally made with lamb.

I also like to add a little fresh chilli to mine to give a kick at the back of the throat. I only use half a birds eye chilli so as not to overdo it.

Lahm bi ajeen dough is the same as sfeeha dough which combines a little milk with the water when fermenting the yeast.

This milk makes the dough ever so slightly softer which makes them easier to fold.

However, many people use regular manakish dough to make lahm bi ajeen and it tastes practically the same.

Especially if they are making lots of different types of Lebanese pastries (mu'ajannat) and don't have time to prepare a separate dough.

I roll the dough quite thin and you will need some extra flour to make sure it doesn't stick.

You can crimp the edges if you like as the meat mixture usually contracts from the sides.

Though to tell you the truth, most times I can't be bothered and just simply roll out the dough into little circles.

Use the highest quality meat you can afford and buy if possible on the day you want to make them.

Take out the meat at least half an hour before so it has time to come to room temperature.

Try and source the best fresh tomatoes that are ripe and juicy. If your tomatoes need a bit of help then add a little tomato concentrate.

Most of us don't have pizza ovens, so if you are using a regular oven preheat it well and use the highest setting.

Alternatively you can use the stove + broiler (grill) method where you transfer the meat pies to a hot non stick pan so they cook for a few minutes underneath then move them to the broiler/grill to finish them of.

The advantage of this method is that they stay soft and don't dry out as they might in a fan oven.

Many people like to enjoy their meat pies with a salty yoghurt drink known as Ayran.

My husband insists on a squeeze of lemon just before eating.

And it really doesn't need to be fussier than that. 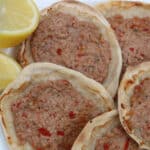 For the meat mixture

To prepare the meat

To assemble the pies

If using a stand mixer, turn the dough for approximately 8 minutes

If your kitchen is cold, you can prove the dough in a turned off oven that has been heated at the lowest setting