Chicken hareesa is possibly one of the most comforting dishes to exist in the history of humankind. Wheat is slow cooked in homemade chicken broth for hours, then beaten down with the chicken until it becomes creamy and delicious.

Then it is topped with some cinnamon and brown butter. So seriously good, it is worth the many hours that goes into making it. You can make a short cut version but it won't be the same.

Hareesa is popular around certain times of the year such as the Shia festival of Muharram. People will make it in large pots, often over wood-fire, and offer portions to neighbours or passers by.

You will need to find peeled wheat kernels, you can't make it with regular wheat kernels. Here's how they look like.

These three main ingredients for this hareesa are:

You will need to start the night before by soaking the peeled wheat in water and bicarbonate of soda (baking soda).

Some people soak the wheat in hot water to speed up the process.

The broth for hareesa is very basic and doesn't need too many herbs. Some black peppercorns, cinnamon, cardamom and cloves are all the aromatics you need, along with a carrot and an onion.

For one kilogram of wheat, you will need two good sized chicken or three baby ones.

When the broth is done, shred the chicken and add to the wheat half an hour before the end. You want to cook the chicken just enough to blend into the hareesa without overdoing it.

This dish can also be made with meat. Cooking the meat in a pressure cooker is a good idea to make it tender.

You could use either chicken or meat broth to add to the wheat. I've never seen a vegetarian version but let me know if you've tried one.

You will need at least two very large pots to make this. One for the broth and one for the wheat to cook in.

You will also need a large wooden spoon to keep beating the wheat.

Hareesa will store in the fridge for up to three days, and can be frozen in portions for up to six months

To reheat simply, defrost and add a little hot water to loosen it.

It is a good idea to make this dish with family and friends. This way someone can shred the chicken, whilst another can tend to the wheat. It also makes the time go by quicker.

It is very important to keep beating the wheat with the chicken especially during the last hour. Take it in turns to make sure the wheat doesn't stick to the bottom of the pot.

To finish the dish off, add a tiny sprinkle of cinnamon and some browned butter.

The best way to make browned butter is to heat up the butter on the lowest setting and swirl it around occasionally.

When the butter starts to foam watch it very carefully and you will start to notice it brown. Take it off the heat as soon as it turns a golden brown and be careful not to burn it!

Some people like the texture closer to a soup and other's more like a porridge. You can loosen the texture by adding a little more stock although bear in mind it will thicken when it cools. 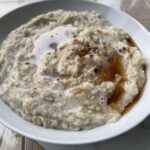 Slow cooked wheat with chicken and topped with cinnamon and brown butter.

To prepare the wheat

To make the chicken stock

To make the hareesa